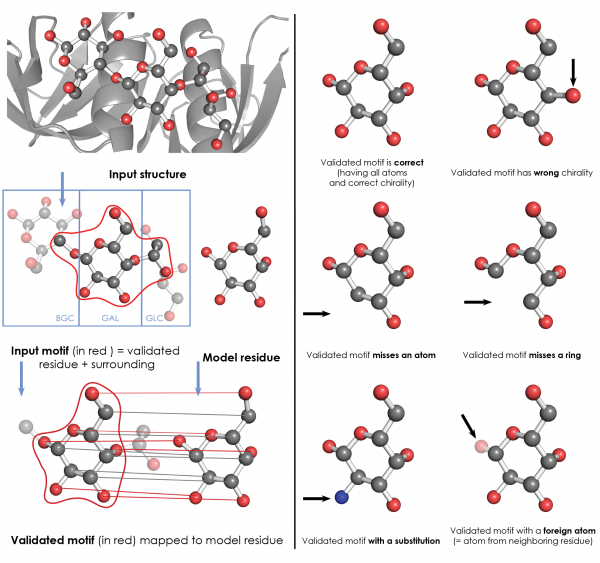 Scheme of the validation procedure for an input motif. In this example a beta-D-galactose (GAL) is inspected for the completenes, chirality issues and naming issues. ON the right a typical validation results are available.

Within the MotiveValidator environment, the term validation refers to the process of determining whether a molecule is structurally complete and correctly annotated. This means checking if the topology and chirality of each validated molecule correspond to those of the model with the same annotation (3-letter code) as the validated molecule.

MotiveValidator implements the validation of annotation approach, which consists of several steps. First, for each molecule under investigation, the input motif is extracted from the input. At the same time, the appropriate model is retrieved from wwPDB CCD. Then, the validated molecule (or validated motif) is identified as the subset of atoms common in the model and the input motif. Subsequently, the validated molecule is compared against the model, atom by atom. All the validation analyses in MotiveValidator are based on this comparison of atom properties (presence, chirality, element symbol, PDB name, etc.). Other unusual aspects encountered during validation are reported as processing warnings (e.g., which conformer was validated if several conformers were present).

The validation analyses performed by MotiveValidator cover all main issues which have been observed in the topology (2D structure) and geometry (3D structure) of ligands and non-standard residues. These validation analyses, along with their respective results, can be classified into three categories, namely Completeness, Chirality and Advanced analyses.

For each MotiveValidator job, the molecules deemed for validation are detected and validated. The result is systematically organized into reports:

Continue by learning about the validation modes of MotiveValidator or Table of contents.